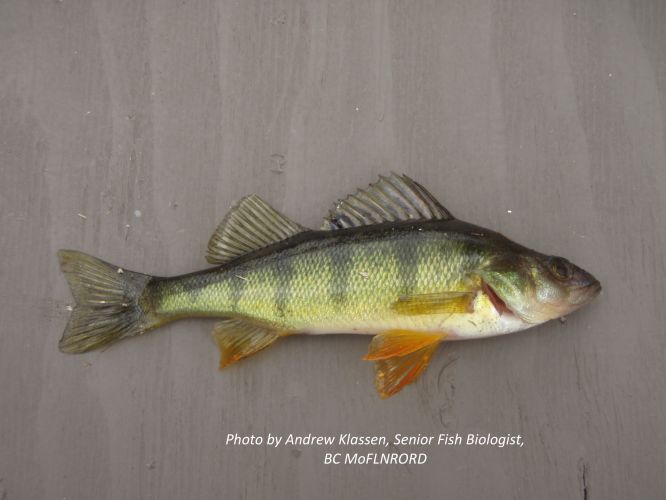 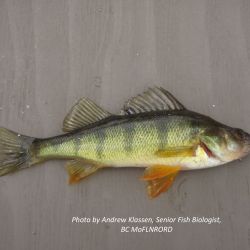 General: Invasive fish to BC but native to many parts of NA. Used to stock lakes for fishing.

Special Features: They have a yellow-green dorsal (top back) and caudal (tail) fins, yellow-red pelvic fins (bottom belly) and a forked tail. On the sides of their bodies, they have up to 7 green-brown vertical bands.

Differences: The Walleye is a larger fish measuring 30-50cm and has canine teeth. Yellow perch do not have canines. The body shape of a Walleye long and slender whereas a perch has an oval, laterally compressed shape.

Where did it come from? Yellow perch are native to Canada and North America, east of the Continental Divide. They can be found from Alberta north into the Northwest Territories and east to Nova Scotia. In the US, they live in North Dakota waters and into the eastern states and south to South Carolina & Georgia.

Where does it live here? Yellow perch are a freshwater fish that live in ponds, creek pools, rivers and brackish waters (slightly salty, mix of river and seawater). They are found in the Kootenays and Okanagan, Vancouver Island and Lower Mainland of Vancouver. They were introduced intentionally for sport fishing.

When does it reproduce & mature? Spawns in the spring between April & May. The eggs hatch in about 8-10 days. The larva and juveniles that can drift downstream with the current. Females mature after 4 years and males after 3.

Spreads By: Yellow perch have been spread by a variety of ways that all involve humans. They have been stocked as a sport fish, released from fish markets & aquariums and transported unknowingly by boats.

Impacts & Risks
What can I do?
References