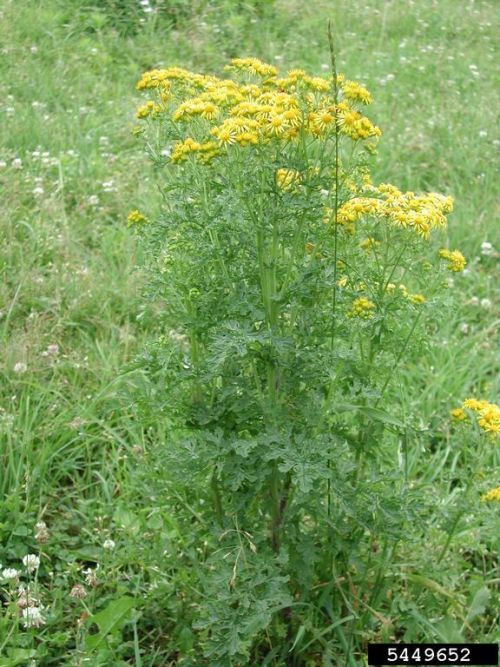 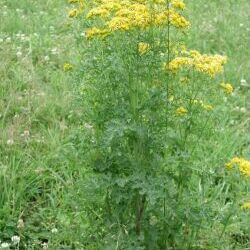 Tansy ragwort is a biennial or short-lived perennial in the Asteraceae (sunflower) family. The taprooted plants have one or more branched stems, and grow to 1.2m in height. Flat-topped clusters of several or many daisy-like flowers appear from July to September. Leaves are alternate and deeply cut, large at the bottom of the stem and becoming smaller towards the top. Seeds are 1mm long and ribbed, with a 3mm white pappus (cluster of hairs).

Primarily a weed of agricultural land. It grows on disturbed sites including fields, roadsides and clearcuts.

This plant reproduces by seed, which germinate in spring and autumn. Up to 150,000 seeds are produced by one plant, and seeds can remain viable for more than 20 years. Tansy ragwort reduces the forage production of pastures by up to 50%. Because it is poisonous to cattle, fields with more than 5% cover of tansy ragwort are not suitable for grazing. In addition, honey or milk produced from infested pastures contains trace amounts of alkaloids, and may affect human health.

Five biocontrol agents have been released in BC with varying success. Repeated mowing before flowering will prevent seed production. Once the plants flower, they will produce seed even after they have been cut. Small infestations can be hand pulled. Seeding disturbed areas with perennial grasses and forbs can prevent establishment. Cattle should be managed to maintain the cover of perennial plants. Please contact LRISS for all other treatment information.